How a ‘Ralph Breaks The Internet’ animator smashes...
How The PS Classic Became The PS “Yeet”...
MCU shows on borrowed time: Why Iron Fist...
Watch This: Take Your First Look At The...
All Aboard the 90s Nostalgia Train! ‘Rugrats’ is...
Check Out The New Goodies Coming To No...
I Don’t Wanna Grow Up, I’m A KidCon...
Doctor Who Season Eleven Teaser Drops During World...
The Predator Red Band Trailer Is Why I...
Time for another adventure! “Shadow of the Tomb...
Prepare for a reunion! ‘Zombieland 2’ is here!
‘Black Widow’ Movie Finally Finds A Director!
Cancelled Dead Space 4 Was Revealed To Be...
Dragonball Super News: Broly Becomes Canon Again!
Sony Xperia XA2 Plus – Welcome Back Hi-Res...
Get ready! Is Marvel Comics Changing this Heroine?
Borderlands 3 Release Date Rumors Coming Out!
Watch This! Netflix Trailer for ‘Extinction’ Looks Killer!
Wait, There’s How Many Cameras on the Samsung...
‘Fortnite’ Season Five – Worlds Will Collide and...
Home Gaming Ultra-Dark New Gameplay Video For Agony!
GamingTrailers

I couldn’t be more excited about Agony coming out next week. Not only are we going to be doing a live-stream on the day of the release, but if it looks anything like this you’ll see some serious screaming faces on camera:

I just love how it’s not your typical Hell that’s been influenced by decades of media, film and other games. This is just simply twisted. Twisted in such a way that’s less Zdzisław Beksiński, and more… Marilyn Manson? No fire and Lucifer, just more vulvas and naked succubi. I mean, even the Agony logo uses a iconically similar image to a female body part. From the Steam page:

You will begin your journey as a tormented soul within the depths of hell, without any memories about your past. The special ability to control people on your path, and even possess simple minded demons, gives you the necessary measures to survive in the extreme conditions you are in. By exploring the hostile environment and interacting with other weary souls of the hellscape, the hero will soon understand that there is only one way to escape from Hell, and it will require meeting the mystical Red Goddess.
Agony features a full-fledged story mode as well as an open challenge system that randomly generates levels for players to explore and survive to gain new Highscores. In addition to featuring in countless “Most anticipated Horror Games 2018” lists, the kick starter financed title is set to challenge players with its brutal and malevolent environments. 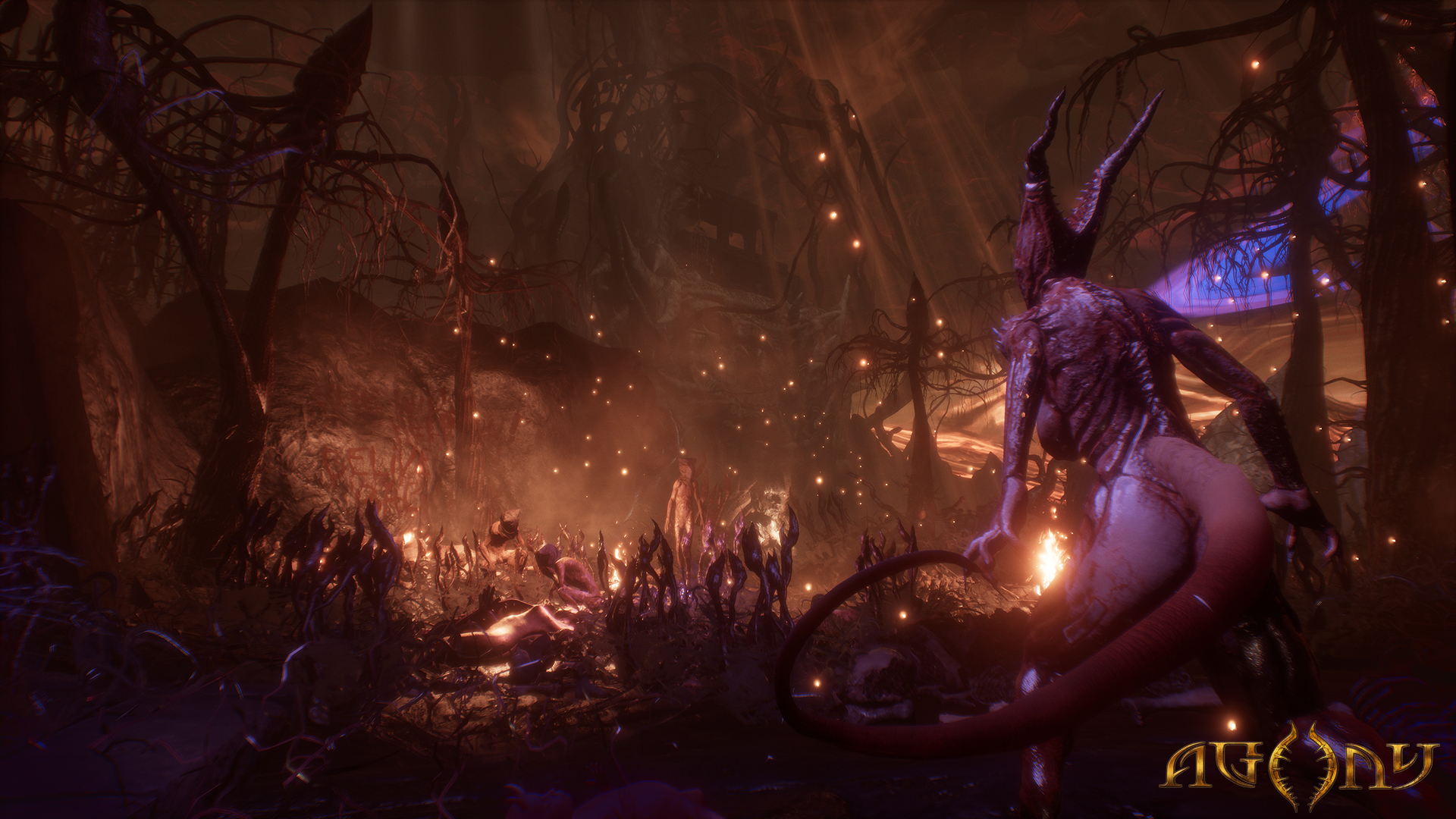 Other than a full narrative-driven single-player, there’s a challenge mode with randomly generated levels. Gameplay mechanics involved are possessing demons, solving riddles and exploring this enigmatic version of Hell. Are you excited? Because if you like games that were supposed to have AO (Adults-Only) rating, then this grotesque horror-fest will be for you. Agony launches May 29th, 2018 on PC, Xbox One and PS4.
What about you geeks? Excited for Agony? Are you going to tune in to our live-stream and see for yourself? Let us know in the comments!

‘Halloween’ Review: An Icon Returns to Give...

Cancelled Dead Space 4 Was Revealed To...